UKLF support the Leathersellers' float at The Lord Mayor's Show 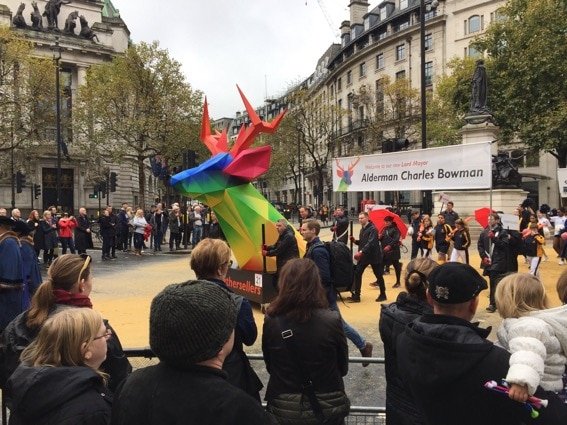 It did not rain on the Leathersellers' parade as over 200,000 people flocked to the City of London to welcome the new Lord Mayor Charles Bowman, as he officially accepted his civic duty for the next year.

Having caught the earliest of trains from Northampton on the morning of Saturday 11th November, UKLF arrived at the stunning Leathersellers' Hall in Bishopsgate for a pre-parade slap-up breakfast. The sight that greeted us outside the Hall was highly unusual; a 5.5 metre high roebuck in disco colours. Ronnie the Rainbow Roebuck - to give him his official title - proved quite a hit with the assembled crowds.

Positioned in the Leathersellers' "float" with Rachel Garwood, Emeritus Professor Tony Covington and students of ICLT at the University of Northampton, we were drilled on the ingenious three-way position signalling of umbrellas and placards throughout the parade (that's a trade secret), then we were off!

extent of UKLF's choreography involved walking and holding placards; various other Leathersellers' supporters were doing an excellent job of dancing, throwing and catching rugby balls, marching and twirling around with  test tubes.

Purring at our heels throughout the parade was an Aston Martin DB11 and a McLaren 720, both featuring Bridge of Weir Leather Company interiors and driven very demurely by Scottish Leather Group Chairman, Jonathan Muirhead and his son James. It was gratifying to hear the total and complete delight that these sleek vehicles brought to the crowds - and as were standing right in front of them we were very pleased that the brakes were in tip-top order too, as were the horns! You might also be pleased to know that the boot space of these high-performance cars also managed to contain more packed lunches than you could shake a stick at, which we ate on the Embankment at the half-way point.

Returning to the Leathersellers' Hall was at a steeper gradient and at a more cracking pace than the morning's walk, and we arrived back in plenty of time to warm up and rest before the cakes were served! What a way to celebrate 802 years of tradition and pageantry.