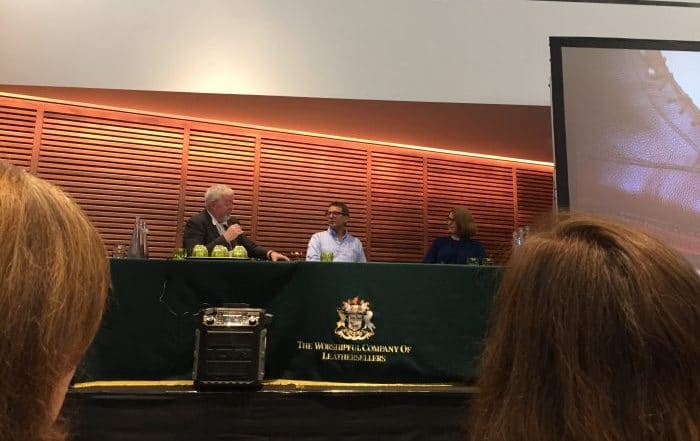 Leather designer Bill Amberg and Deborah Carré from shoemakers Carréducker kicked off the panel discussions at the Makers Stories - Live event on the opening day of London Craft Week 2018.

The event was sponsored by creative business incubator Cockpit Arts and the discussions were hosted by curator Brian Kennedy. The event was held at the Leatherseller's Hall and included contributors from several craft disciplines, gallerists and also the rather formidable design critic Corrine Julius.

Themes from the discussion held between Bill and Deborah focused on the importance of the cross-fertilisation of skills in creating a master maker, the significance of defining your brand as you start out and the importance of utilising networking opportunities. Interestingly, all panellists in the ensuing discussions talked about the social awkwardness of networking - it must be a British thing - but agreed that networking is a skill that can be practised, comes in many shapes and forms such as the Carréducker blog and not to expect instant results. Bill made the point that networking is about keeping things simple - be direct about what you are after and don't be afraid of asking anything.

Constant learning in your chosen skill area was also discussed, particularly in the statement from Bill that "there's no such thing as a stupid question" and that after many years of designing he still "doesn't have all the answers". Deborah commented that younger entrants into the world of craft should not be held back by the apparent "right" or "traditional" route to doing things, with Bill adding that the applications of leather work are so varied but full of synergy, so following a rigid craft path will not suit all.

Social media was hailed as a godsend for a lonely maker in a workshop, where building both a brand and generating business is a necessary evil. Bill stated that "making beautiful things isn't enough" with a broader skill set required for the business to establish itself properly.

The discussion included with Deborah's statement that "it takes patience to build something of quality and value" - the same for which can be said of building networking relationships.