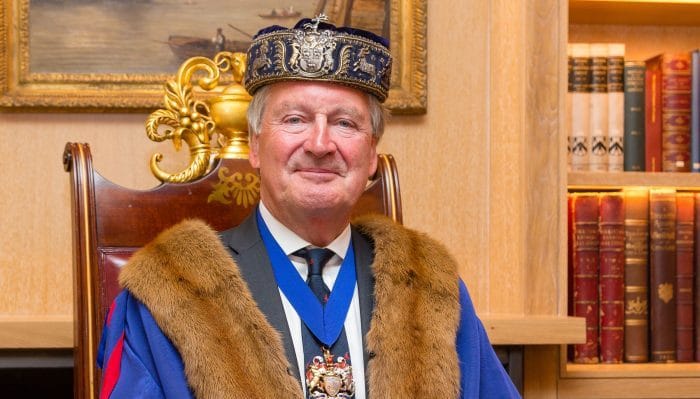 Jonathan is a seventh-generation leather manufacturer. His family’s business has been producing leather in Glasgow and the surrounding area since 1758. At the end of June 2019 he retired from Scottish Leather Group Limited, where he had been Chairman since 2003 and has since been appointed Honorary President. Most of his career was spent with the Group’s largest subsidiary, Bridge of Weir Leather Company, the world’s oldest independent supplier of leather to the automotive industry and a five times winner of a Queen’s Award for Enterprise.

The Leathersellers’ Company is one of the ancient Livery Companies of the City of London, ranked fifteenth in the order of precedence. It was founded by royal charter in 1444 with authority to control the sale of leather within the City. The Company no longer has this regulatory role, and instead devotes its energies to support for charity, education and the British leather trade.

The Leathersellers’ Company is made up of 150 liverymen and a variable number of freemen. There are three main routes into the freedom: by apprenticeship, patrimony (i.e. if the candidate’s parent is a member) or by purchase at the Company’s invitation. Freemen are eligible for election onto the livery, and once on the livery, a member may be invited to serve higher office within the Company.

The Company is governed by an elected Master and three Wardens, and the Court of Assistants, which is a permanent body comprised of senior Liverymen who have served as Master (Pastmasters) and those who have not (Assistants).

The Company elects a new Master and Wardens each summer in a traditional ceremony. Members of the Livery assemble at the Hall before processing to church for the Election Day service. At a Confirmation Court in the following month, the outgoing Master and Wardens ‘crown’ their successors with silver garlands which date from the seventeenth century, and the new Master’s year officially begins.

The Master, Wardens and Court of Assistants act as a chairman and board of directors, meeting once a month to decide policy and oversee Company affairs. Assisting them is a small permanent staff headed by the Clerk, who is responsible for the day-to-day management of Company business.