Jonathan Muirhead steps down from COTANCE Board 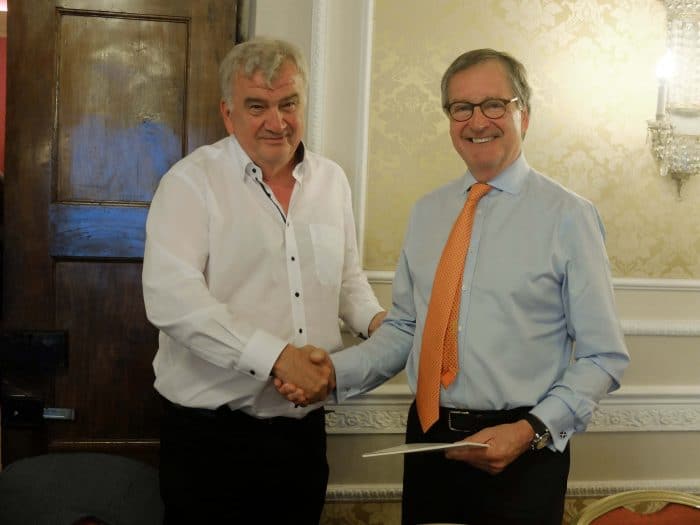 After completing his 6-year Presidential cycle , Mr Jonathan Muirhead (Scottish Leather Group – UKLF) stepped down from the COTANCE Board. He was long applauded for his highly fertile leadership and his loyal services at the head of the European leather industry organisation. COTANCE report that Mr Muirhead did not skimp on efforts for addressing hands-on the sector’s issues, listening to everybody and always generating consensus. His success and style made him a very cherished COTANCE Presidency member.

Austrian Andreas Kindermann, CEO of Wollsdorf Leather, was unanimously elected by his peers as President of COTANCE at the General Assembly that took place on 29 May in Verona (Italy). Mr Kindermann takes over this position from German Thomas Bee (Schafstall - VDL) for a 2-year mandate until 2020. He addressed a few words of gratitude to the membership for the trust put in him and committed contributing in the interests of the European leather industry and in the promotion of the value and the quality of European leather together with all national organisations and the strong team of COTANCE in Brussels. Mr Bee thanked COTANCE members and the Secretariat for the assistance received during his Presidency.

COTANCE delegates from Sweden, UK, Germany, Italy, Spain, Romania, Portugal and France watched an eye-opening video produced by UNIC, demystifying one by one a collection of the most blatant fake news that can be found in the media. Delegates also watched the recent Leather Naturally! Video and the one produced by LG for promoting its new leather covered smartphone G4. Delegates agreed intensifying and developing the COTANCE strategy in support of the image of leather pushing for mandatory authenticity legislation in Europe and developing a Web-based communication campaign addressing consumers. COTANCE also decided to prepare for next year’s 50th anniversary of the umbrella association with the choosing of a new slogan in a stakeholder-inclusive process that should reflect the ambition of the European leather industry in the XXI century. Slogan proposals will be tested for their merits in the different languages and against selected audiences for the most appropriate being finally chosen in the COTANCE Autumn Council that will take place mid-October in Naples.

Finally, it was also noted that increasingly unpredictable and unreasonable testing demands from customers, notably in the fashion sectors, were adding unwarranted unproductive costs on tanners and creating further pressure on margins for leather manufacturers.